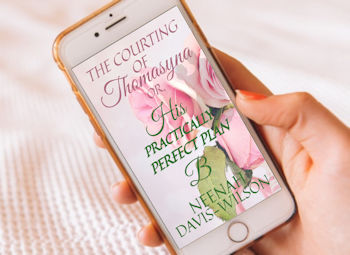 Papa Ascott’s will stipulates that Stephan must marry by his next birthday or his vast wealth will pass to Papa’s menagerie. Just weeks before the wedding, Cousin Charley spirits Stephan’s fiancee away.

Stephan isn’t slow in coming up with a plan B for meeting the absurd conditions of Papa’s will. The plan needs one thing to succeed.

The careful courting of actress Thomasyna Tollefson who was Charley’s most recent romantic interest . . . a relationship that ended badly for her in more ways than just Charley’s running off with Aveleen.

Which fact ought to work in Stephan’s favor, right?

Not when Thomi is as stubborn as he is persistent! She hasn’t one wish to begin another relationship so soon after the last one. Especially not with anyone related to Charley!

Not even for $900 million plus and a mansion in Newport!

Set among horse farms and the glamour of success and failure of believable situations and characters. . . . Ms. Davis-Wilson has created an in-depth story of family, the promises, betrayal, and forgiveness woven within detailed plots and subplots. A truly enjoyable read for anyone who loves long, sweeping family sagas. I found it an engaging and heartfelt drama . . .